On Wednesday, May 4, a state law banning the use of single-use plastic bags will go into effect. Paper bags will be barred in large grocery stores as well. But Montclair businesses have been preparing for the bans for years.

In September 2020, the state Assembly and Senate gave their approval to what would become one of the most stringent bans on plastic products and paper bags in the country. 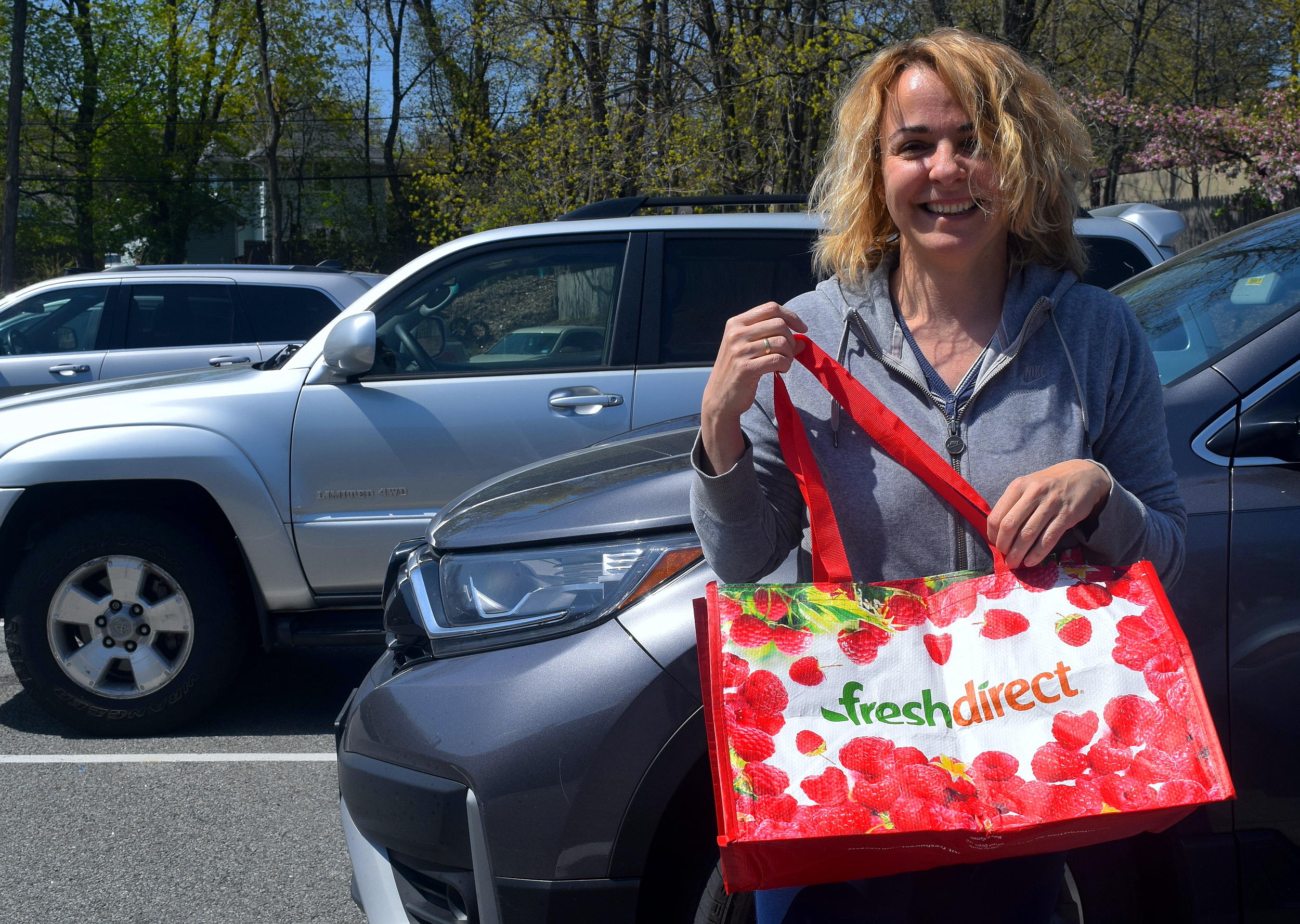 The ban on single-use plastic is nothing new to Kings shopper Hajni Nagy, who brought a reusable bag to do her shopping at Kings in April 2022. Reusable bags are the norm in her home country of Hungary, she said. (TALIA WIENER/Montclair Local)

The ban highlights the growth in plastic usage and its effects. Plastic production has increased from two million tons in 1950 to 367 million in 2020, according to Plastics Europe, a trade association that aims to reduce plastic waste. Eight million tons of plastic end up in the oceans annually, which is estimated to result in the mass of plastic pollution in the ocean exceeding the mass of fish by 2050, the World Economic Forum said in a 2016 report. And as plastics break down, they release harmful chemicals that enter the food chain when consumed by marine life and have been linked to health problems in humans.

Gov. Phil Murphy signed the legislation in November 2020 and the law was set to go into effect 18 months later.

Cut to May 4, next Wednesday.

A mandate signed into law in late March created an exception for food pantries and nonprofits—they can keep using plastic through Nov. 4, 2022. 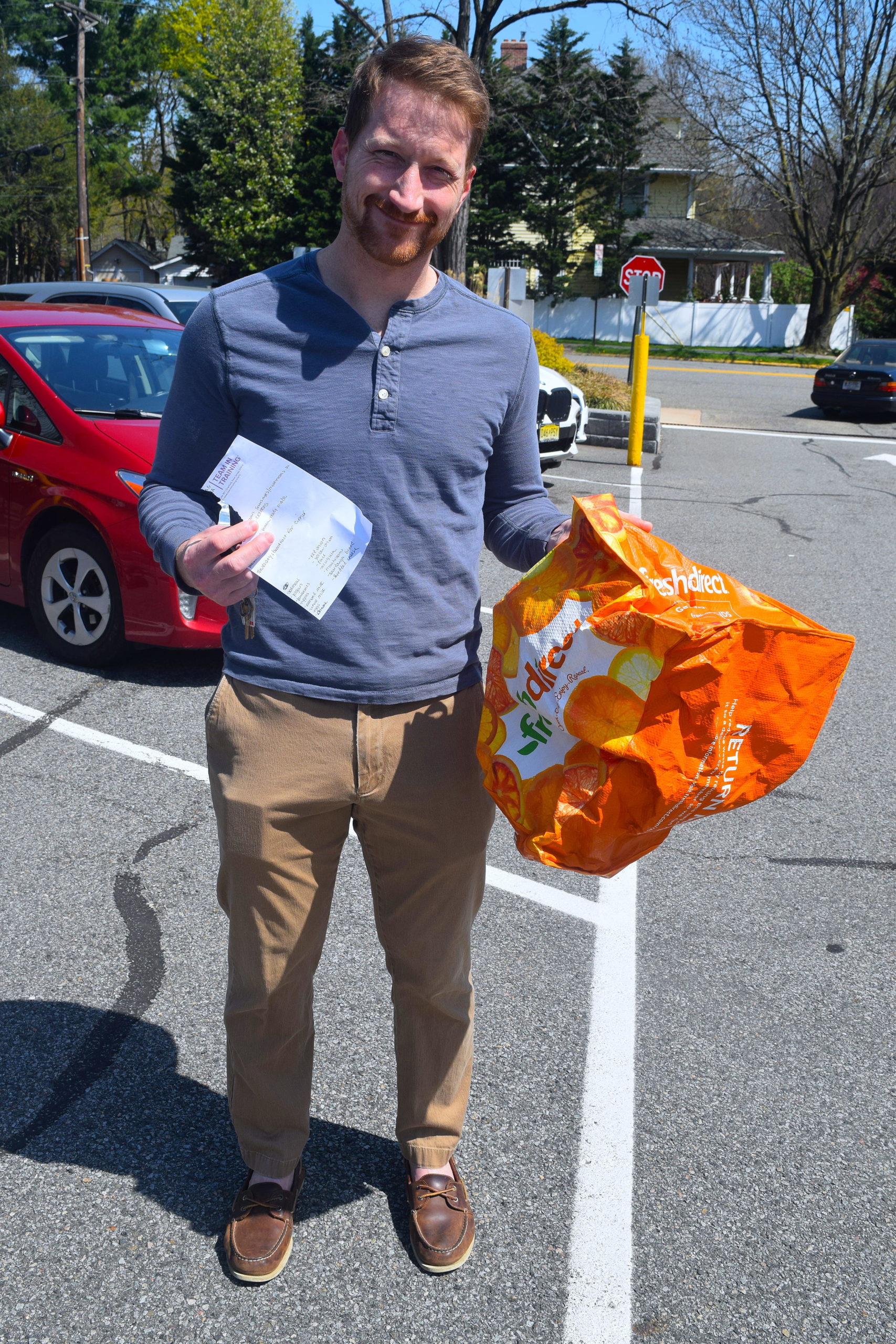 Montclair resident Joe Walter brought a reusable bag to do his shopping at Kings in April 2022. Walter said a Kings employee reminded him during his last trip to the store that a ban on plastic bags for all stores, and paper bags for large grocers, would soon go into effect. (TALIA WIENER/Montclair Local)

But since December 2019, Montclair has had its own ordinance prohibiting single-use plastic bags in large chain stores. Originally, Montclair’s law was intended to apply to any store over 2,500 square feet, but it was amended to encompass only stores that are over 20,000 square feet. In Montclair, that includes ACME, Kings and Whole Foods, and the three CVS locations on Bloomfield Avenue, Claremont Avenue and Valley Road.

So for the big grocery stores in town, the plastic bag part of the May 4 ban is already being implemented. But the stores will have to eliminate paper bags as well.

ACME Markets and Kings have been working hard to prepare stores for the ban, Dana Ward, communications and public affairs manager for ACME and Kings, told Montclair Local. Both stores are subsidiaries of Albertsons.

“We are committed to offering our customers a wide variety of reusable bags for purchase, and encourage our customers to bring back their bags when they shop to further reduce the impact on the environment,” Ward said.

ShopRite has also been preparing customers for the upcoming ban, with in-store signage and reminders to “plan for the ban,” spokeswoman Karen O’Shea said.

“While our goal is to encourage customers to ‘be the change’ and bring their reusable bags to shop, we will also have a variety of reusable totes and options for shoppers who forget to bring their own bags after the state law takes effect,” O’Shea said. “ShopRite believes the best bag is a reusable bag.”

At Whole Foods, customers will have several reusable bag options to choose from if they forget to bring their own, according to a spokesperson for the company.

“We offer a wide selection of reusable grocery bags in a variety of colors and sizes at affordable prices,” the spokesperson said.

For the local businesses that did not fall under the township’s ordinance, the past 18 months have been key to planning and preparing for the ban.

The Montclair Center Business Improvement District has been sending out emails about the ban to stakeholders for months, according to executive director Jason Gleason.

But the ban will be harder on some businesses than others, he said.

“If COVID has taught my office anything, it’s that there is no one-stop-shop, perfect solution that solves all businesses’ problems perfectly,” Gleason said. “Every business is a very unique entity that has a different set of problems.”

Business owners will have to get creative to abide by the ban without acquiring significant additional costs for packaging and bags, he said. But he said he’s hopeful the transition will go smoothly.

“We’ve got a crafty bunch here,” Gleason said. “I’m quite confident that everyone will find some solutions.” 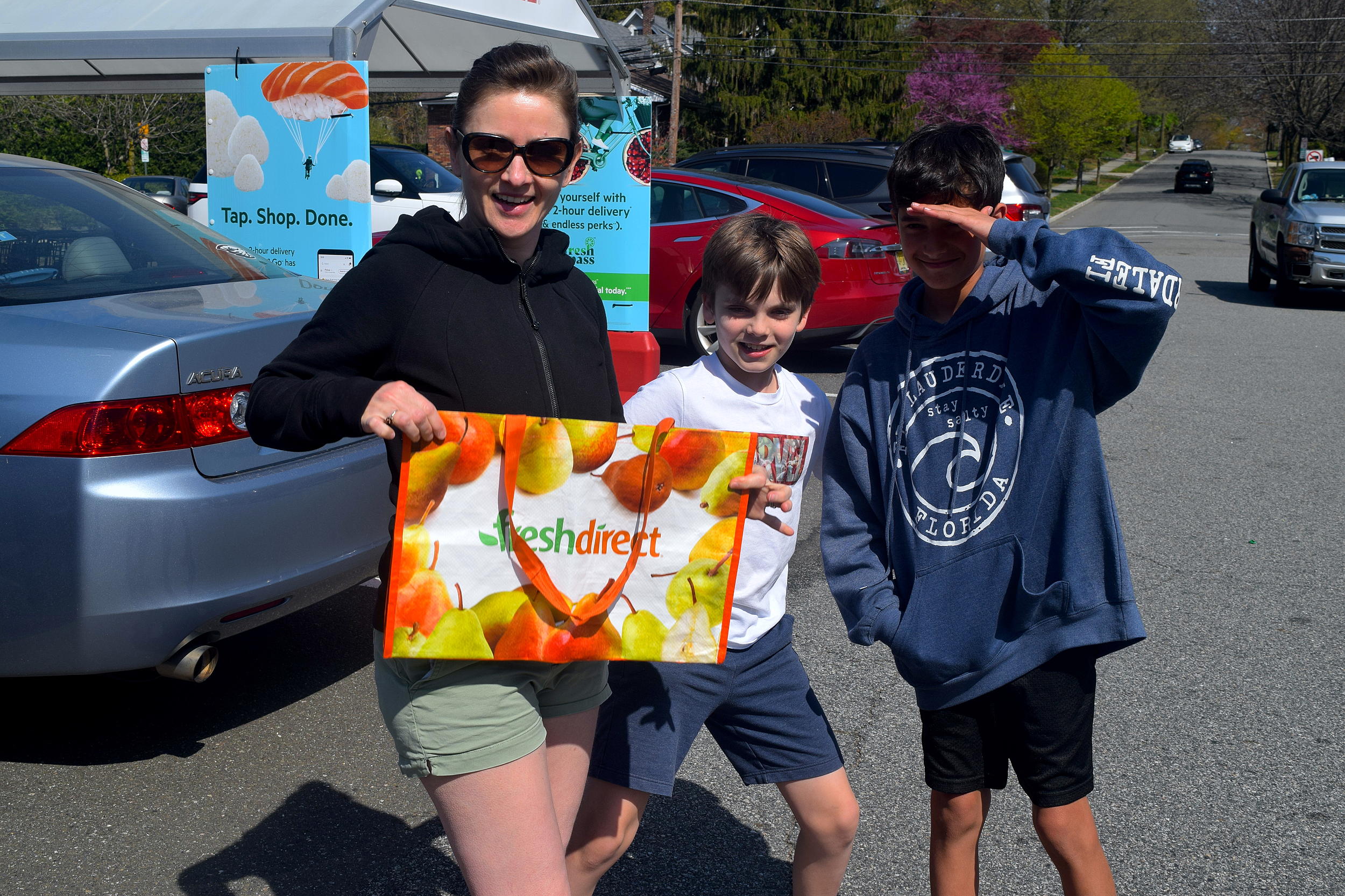 ACME Markets shopper Sue Kelsey said she has been using reusable bags for about four years and has two drawers full of them at home. Kelsey is seen here with her two sons on a shopping trip to ACME in April 2022. (TALIA WIENER/Montclair Local)

Businesses in Montclair’s South End have been practicing for the ban, giving out paper bags and limiting usage of single-use plastic bags, Zina Floyd, president of the South End Business District and owner of Café Moso, said.

But switching to paper bags is not as easy as it may seem, Floyd said. Café Moso, located at 307 Orange Road, began by using wax-coated brown bags, but after putting two to three items inside, the bag would begin to rip, she said. So the restaurant switched to white paper bags, which seem to be holding up better.

“They are more expensive; however, we don’t really have much of a choice,” Floyd said. “I don’t want to buy food and have it drop out of the bag.”

Floyd said she is wary of bags ripping because she’s seen it happen—“the macaroni and cheese in particular is pretty heavy.”

“It’s gonna be a bit of a challenge, but I think that it’s needed,” Floyd said. “I think patrons and businesses collectively will adapt as we have with everything else that’s happened in the last few years.”

At L&B Healthy Pet Markets, located at 15 South Fullerton Ave., preparation for the bag ban began months ago, according to founder and co-owner Marc Berube.

Berube has been reaching out to the store’s distributors and food makers, many of whom have donated their branded reusable bags. He has collected 300 bags, and plans to donate proceeds from their sales to a local animal organization. The store is also working with one food vendor to create a bag featuring both their logos at a shared cost.

“It’s going to be a positive change because we will get to help support the environment and it really won’t be much of an issue for us,” Berube said.

Paper bags just don’t cut it for all of L&B’s products, Berube said.

“We need strong reusable grocery shopping bags because of the type of products that we sell,” he said. “Paper is not a good option because some of our customers are buying 18 to 36 pounds of food.”

The store has been advertising to its customers about the upcoming ban, but many customers already bring their own bags to shop, Berube said.

“Montclairians, I feel, are really adaptive, and they’ve been waiting for this to happen,” Berube said. “I think it’s going to be an easy transition for everybody.”

Customers at Long Hing Restaurant, located at 320 Orange Road, will receive their Chinese food in paper bags once the ban goes into effect, a change from the plastic bags the restaurant has been using, according to manager Winnie Chung.

“Customers can bring their own bag if they want,” Chung said.

She said she is not worried about food spilling or leaking in the paper bags.

At Amanti Vino, located at 30 Church St., owner Sharon Sevrens is hoping the rules around what counts as reusable bags are flexible. The shop has a 10-month supply of six-bottle plastic bags that she orders five years in advance from an international vendor, at a cost of almost 50 cents per bag.

The plastic bags, made from recycled materials, adhere to two of the bag ban’s rules for reusable bags — they are reusable and washable, according to Sevrens. But they do not have stitched handles, the third stipulation of the law.  Sevrens has sent images of Amanti Vino’s bags to various state government bodies, hoping her bags will be exempt from the ban, but as of Tuesday, she had yet to hear back.

Sevrens is concerned about what she might need to do with the leftover inventory.

The shop also carries paper bags that hold one and two bottles of wine and boxes to be used if a customer purchases a larger quantity of bottles. Sevrens said she also has been selling reusable wine totes in-shop for years and will continue encouraging customers to purchase them.

“Something certainly needs to be done to save our planet Earth, so it’s not that we’re opposed to the legislation going into effect,” Sevrens said. “But it’s tricky.”

Montclair Diner, at 613 Valley Road, has already been using paper bags, so the ban won’t have a significant impact on its system, manager Lynda Edgeson said. Sometimes when one person is picking up multiple orders, the restaurant places the paper-bagged orders into a plastic bag, but that’s easy to cut out, she said.

And Edgeson said she also isn’t worried about food spilling in the bags during transit.

“Our to-go containers are really pretty good,” Edgeson said. “We don’t have a lot of leakages.”

Customers are welcome to bring their own reusable bags when they come to pick food up, just as food delivery services such as Grubhub have always done, she said. But the diner isn’t planning on creating its own reusable bags anytime soon.

“We’re not entirely in the time of COVID, but we’re doing our best to try to keep things kind of neat and clean,” Edgeson said.

This story was produced in collaboration with CivicStory (www.civicstory.org) and the NJ Sustainability Reporting project (www.SRhub.org).